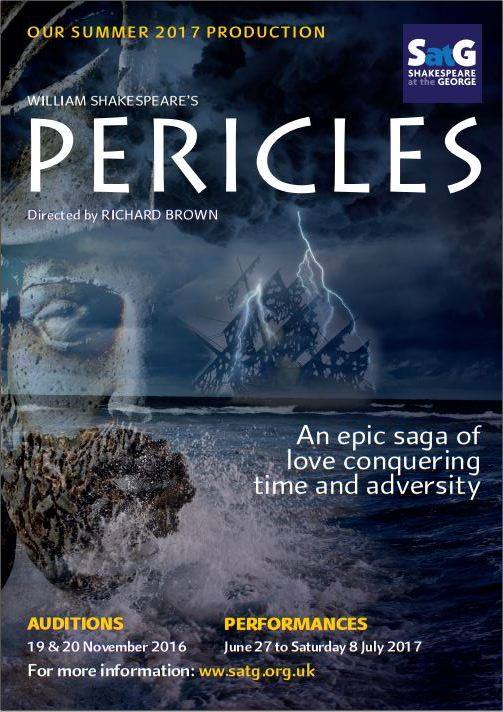 AUDITIONS | Shakespeare At The George ‘Pericles’

Open auditions will be held at The George Hotel, Huntingdon on Saturday 19th and Sunday 20th November between 10am and 4pm. To book an audition please contact the Director by email: pericles@satg.org.uk

List of principal characters
(Please note that it is the intention at the moment to use considerable doubling to cover the wealth of minor characters and give the production the feel of a fairy tale performed by a company of actors)
Male Roles:
Pericles – Prince of Tyre
Helicanus – elderly lord of Tyre
Cleon – Governor of Tarsus
Simonides – King of Pentapolis
Pandar – Owner of a brothel
Boult – Servant in the brothel
Lysimachus – Young Governor of Mytilene
Thaliard – a lord of Antioch
Female Roles:
Dioniza – Wife to Cleon the Governor of Tarsus
Thaisa – Daughter to Simonides & wife of Pericles
Lychorida – Nurse to Marina
Marina – Daughter of Pericles
Bawd – Wife of Pander & joint owner of the brothel
Roles which will be either male or female:
Cerimon – Lord or Lady of Ephesus
3 Lords & Ladies of Tyre
3 Fishermen (or women)
3 Knights
Goddess Diana
Sailors, pirates, whores and others