During the weekend of 6th – 7th May, HDC sponsored me to attend the Big Backstage Weekend; an event organised and facilitated by the Royal Shakespeare Company to provide training to amateur theatre companies across the UK. Needless to say, I was extremely excited at the prospect of learning from such a reputable theatre company and the experience did not disappoint! 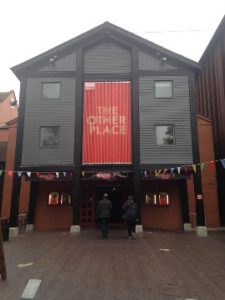 meeting hosted by the RSC’s Project Producer, Ian Wainwright. It was lovely to bump into some of our friends from Shakespeare at The George who were also in attendance for the weekend.

We stayed in the Studio Theatre for a sound workshop lead by the RSC’s Head of Sound, Jeremy Dunn, who was ably assisted by technicians Nathan and James. For the first part of the workshop, Jeremy explained the various different types of sound equipment the RSC use in some detail; demonstrating how to assemble and use a basic sound system with a microphone. He also talked us through troubleshooting different sound issues we might face e.g. feedback. For the second part of the workshop, Jeremy and his technicians rigged up a sound desk and, using the sound system installed in the space, showed us how to operate the sound desk as well as use software package QLab on a laptop to create a soundscape. 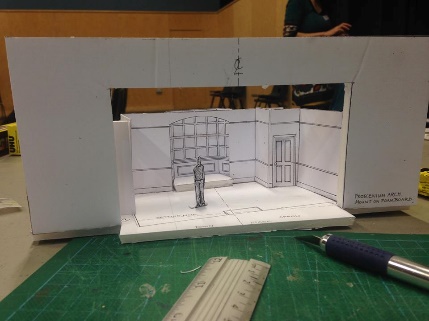 After a delicious buffet lunch, we took a leisurely stroll down the road to the Clore Learning Centre for a set construction workshop led by freelance set designer Alex Marker. During his career, Alex has designed for a wide variety of West End, fringe, touring and regional productions. The first half of this workshop was an introduction to scale model making. A scale model can be an incredibly useful tool in set construction as it can be used to identify and solve potential problems before the set build commences. Alex talked us through the basic equipment and materials needed before challenging us to create a 1:50 scale model based on technical drawings. I partnered up with Julie, a fellow Drama teacher, from the Wirral and we set to work. Thankfully, Alex provided us with a few time-saving handy hints which we took on board and a short while later we successfully presented our scale model. 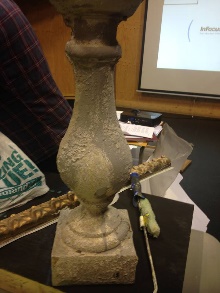 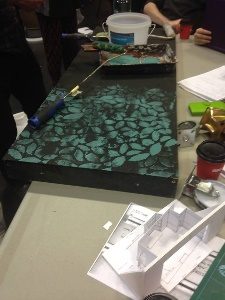 The second half of the workshop was dedicated to set construction. Alex talked us through the essential toolkit for building a set as well as the various health and safety considerations that have to be made when designing and constructing a set. After divulging some helpful money-saving ideas regarding the use of different materials, Alex introduced us to some tricks of the trade; demonstrating how to create a variety of paint effects and successfully create textured surfaces.

Following the set construction workshop, we had the opportunity to visit The Play’s the Thing exhibition. For the exhibition, the RSC have opened their archive to display a variety of artefacts spanning one hundred years of theatre-making at Stratford-Upon-Avon. There were plenty of interactive activities to engage with but it was the costumes that really sparked my interest; particularly Vivien Leigh’s costume from the 1955 production of Titus Andronicus and Anthony Sher’s hat and nose from his portrayal of the Fool from the 1982 production of King Lear. However, my personal highlight of the whole exhibition has to be seeing a copy of Shakespeare’s First Folio. 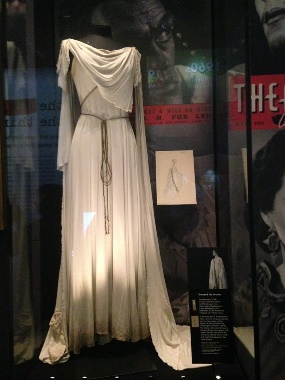 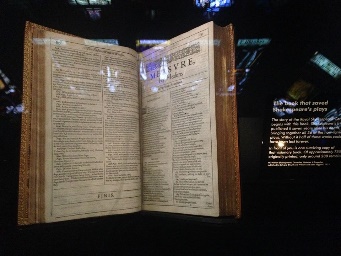 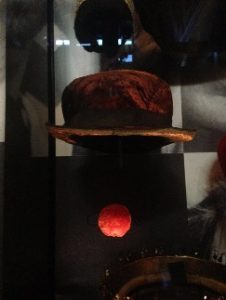 Then it was off in search of a bite to eat before attending the evening performance of Anthony and Cleopatra. The production forms part of the RSC’s Rome Season which includes Julius Caesar, Titus Andronicus and Coriolanus to name but a few. The production was presented in traditional Roman dress and used some clever staging ideas; making effective use of hydraulic lifts to change scenes. The two leads, Josette Simon and Antony Byrne had a real chemistry on stage and gave engaging portrayals of their characters. It was interesting watching the performance having participated in the workshops earlier in the day; I definitely had a heightened awareness of the use of sound and was able to recognise and identify the different types of sound effects being used throughout. 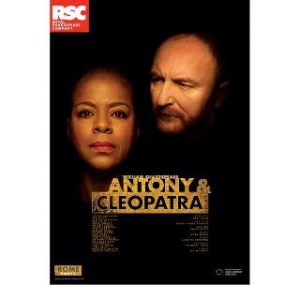 After the performance, we popped over the road to The Black Swan – more commonly known as The Dirty Duck and a regular haunt of RSC actors – for a nightcap before retiring to our B&B and, sure enough, as we were leaving we bumped into the cast of that evening’s performance enjoying a well-deserved drink.

We were privileged to be taken up to The Other Place rehearsal room for our stage management workshop which was led by Julia Wade, Company Stage Manager of the RSC’s Mischief Festival. The room was being used to rehearse the productions taking part in the Mischief Festival and provided an interesting insight into the rehearsal process at the RSC. Julia explained the different types of roles and responsibilities involved in stage management as well as giving us a forum to discuss our own experiences of stage management. We were shown examples of the different types of paperwork produced by a stage manager e.g. rehearsal notes, show reports. We were given advice on how to mark up a script as well as the opportunity to look though the stage manager’s copy of the Antony and Cleopatra script. 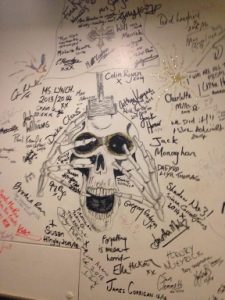 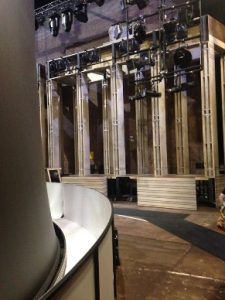 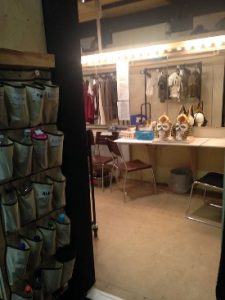 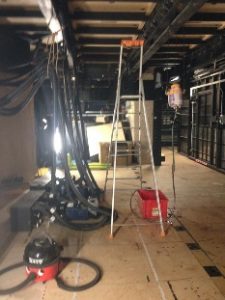 The final part of our stage management workshop was a behind-the-scenes tour of the Royal Shakespeare Theatre which took us into the control rooms of the lighting and sound operators so we could see what kind of environment they work in during a performance. We were also taken backstage to see the quick-change areas, prop store area and stage manager’s desk. It was fascinating to wander around the back of the cyclorama that had been used during the previous evening’s performance of Antony and Cleopatra and also see the props up close. Another highlight of the tour was discovering an RSC tradition: one of the corridors backstage was littered with illustrations and signatures of the actors involved in different productions.

For the final workshop of the weekend we were taken into the auditorium of the Royal Shakespeare Theatre – where we had sat the night before watching Antony and Cleopatra – for a lighting design workshop with the RSC’s Head of Lighting, Vince Herbert and his talented technician Claire. On stage was a rug, armchair and table with a small lamp. We were given a very brief four scene synopsis to light as a collective which incorporated the opportunity to explore practical, character and surreal lighting states. As the ideas flowed, Vince explained – whilst Claire demonstrated – how to use different types of lights to achieve a variety of effects. Vince also demonstrated how to layer the lighting; focusing on practical lighting before establishing the mood. We were given some very useful tips: if an actor is entering the stage during a blackout they should close their eyes a few minutes before to adjust their eyes to the darkness and, when working with thrust staging in particular, find the ‘sweet spot’ where all of the audience can be addressed. Claire gave us an interesting insight into the complexities of follow spot operating; having recently performed the task for the RSC’s innovative production of The Tempest which combined the use of a digital avatar with live actors. 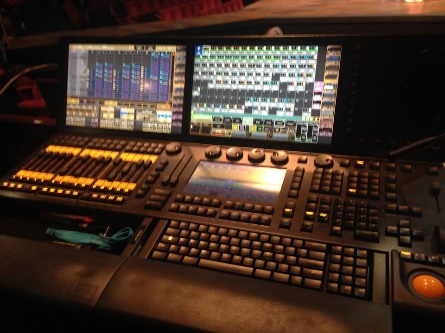 Following the request of another attendee, Claire treated us to a tour underneath the stage of the Royal Shakespeare Theatre to Sub Level 1. Claire explained how the stage could be rearranged to meet the needs of different productions and also gave us a brief outline of the RSC’s technical rehearsal process. We were also given an insight into how the RSC create the effect of flooding the stage with blood when Caesar is stabbed by Brutus: a crewmember on a stepladder with a pump and a bucket of fake blood; reassuring to know that not all of the methods in professional theatres are high-tech! 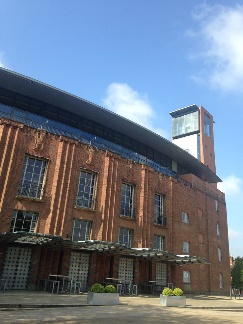 All in all, it was a thoroughly enjoyable and informative weekend. I’d like to take this opportunity to say a massive ‘thank you’ to HDC for enabling me to participate in the Big Backstage Weekend and I look forward to passing on what I have learnt to other club members as well as putting it into practice for future productions. Watch this space!

What a day! The latest of the club’s many social events proved to be arguably the best yet. Many thanks first of all to Josephine, our social secretary, for doing such a great job of organising the day – absolutely top notch. And thank you to our wonderful National Theatre for being the best place in the capital to enjoy a full day of theatre. Already a great venue, the NT’s recent redevelopment has taken the place to another level. 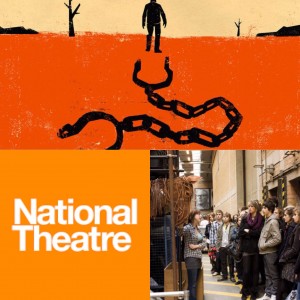 Twenty of us in total took the train into London on Saturday morning, including many new faces joining us for the first time. We arrived on the South Bank around 11.15am & headed straight for coffee in the new ground floor cafe, Kitchen, before beginning our backstage tour. I cannot recommend the tour enough – this was my third time. The tour guides are excellent – informative & entertaining and because of the constantly changing shows within the theatres, the tour is always slightly different. Beginning in the impressive Olivier auditorium, based on the Ancient Greek theatre in Epidaurus, the NT is a breathtaking combination of theatrical ingenuity, technology, creativity and ground-breaking artistic production. The most impressive feature is arguably the drum revolve on the Olivier stage – rather than try to explain it, take a look at this video here. The Olivier holds an audience of 1100 people, all of whom have an unrestricted view of the stage, a design which also means that an actor on stage, standing in the position known as the ‘point of command’ can see every audience member in his peripheral vision, without moving his head.

Another interesting addition to the tour is the Sherling High Walkway (above), where the public are offered a glimpse into the inner workings of the props department, set construction & paint shop, where plays are constructed on a truly industrial scale. On any given day here there can be up to a thousand people at work.

Emerging from our tour the theatre foyers were abuzz with activity & anticipation for the afternoon’s matinee shows. We were booked in to see Timberlake Wertenbaker’s “Our Country’s Good” the story of a group of convicts shipped to the prison colony of Australia, who mount a production of Farquhar’s “The Recruiting Officer”. It’s a very powerful play, made all the more emotional by Cerys Matthews’ haunting original score. It’s inspiring story of the transformative powers of theatre left more than one or two of us a little teary-eyed!

The NT also houses several restaurants and so we decided to round off the day in the new Green Room, which as well as serving delicious food in a fun and vibrant atmosphere also houses recycled props & furniture from past productions. Suitably fed & watered we headed home inspired, entertained & eager to return to see more productions at this great national institution. Thank you NT!