Rumours by Neil Simon. Described as “a madcap, slamming door farce set in a large home located just outside of New York in the year 1988”, Simon himself said “the play started with the idea of doing a farce…The next thing was to do it as an elegant farce, because the farces in Moliere’s days were generally about wealthy people. These aren’t extremely wealthy people, but they are well-to-do. So I decided to dress them in evening clothes. There was something about having them dressed in evening clothes that I thought was a nice counterpoint to the chaos that was happening in the play. And so I picked a reason for them to be dressed elegantly, and it was a 10th anniversary.”

Join us upstairs at The Falcon from 7.30pm on Tuesday 12th February.

A review of our Meet and Greet by Josephine Hussey

On 19 March we had our first social gathering since the AGM and the new committee were elected. We ventured to the Falcon in Huntingdon for a drink and a chance for everyone to meet the committee. 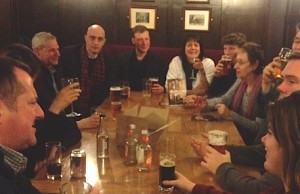 Our meet and greet was an enjoyable evening. Lots of members turned up and we spent the hours in the pub swopping ideas for what we want to happen with the club and productions over the next year.

It was great to see people were excited by some of the ideas thought up for social and the other aspects of our group. It was also fun to chat, get to know more people and feel the enthusiasm other members have for the club. 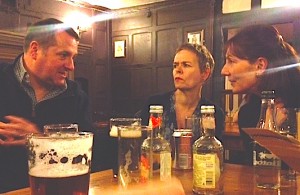 Our next social is a play reading of ‘Noises Off’ at St Mary’s Parish Hall in Huntingdon on 16 April. Come along and enjoy reading and listening to a very funny play.