Some people might scratch their heads at a modern setting of The Crucible and wonder what relevance it might have for today. But it is often the case that our past and our oldest fables will lend meaning to the currents of the present – such is the cyclical nature of human experience.

In 2017, there are thousands of people in Britain who practice witchcraft. There is an annual ‘Pagan Pride’ festival – currently in its eighth year – where attendees can purchase wands, incense, crystals, and various other ingredients for their pursuits. They can be open about who they are without fearing execution. Modern-day Salem is now a haven for contemporary witches and professional psychics, with many a metaphysical business lining the streets. Its first ‘witch shop’ – founded by Boston-born practitioner Laurie Cabot – opened its doors in 1970. Described as the “grande dame of witchcraft” in the USA, Cabot is “proud of the fact that her witch shop and openness turned Salem into something of a safe space for practicing witches.” But however much we may like to think that we’re a universally tolerant society, there is still very much a cultural prejudice towards the idea of witchcraft. In some respects, little has changed.

Antipathy to witchcraft can be traced to the rise of Abrahamic monotheism, especially traditional Christianity. In the preceding polytheistic pagan cultures, the practice of magic was a natural and popular way of participating in an individualistic spiritual experience. However, the traditional Church frowned upon personal spiritual experimentation and insisted that the only valid way of exploring such matters was to submit to their organised hierarchy. Witchcraft was deemed demonic and those who practiced it – witches – were denounced as the most abhorrent type of evil, traffickers with Satan.

Those who practiced witchcraft were forced to do so in secret – the alternative being to suffer brutal capital punishment. Instead of understanding such customs, society was steadily gripped by a climate of fear, misconception and suspicion. Slowly, insidiously, this collective fear produced an unstable culture of finger-pointing, a world where no one was safe, in which monsters were skulking in the shadows and prowling the streets in search of fresh victims. 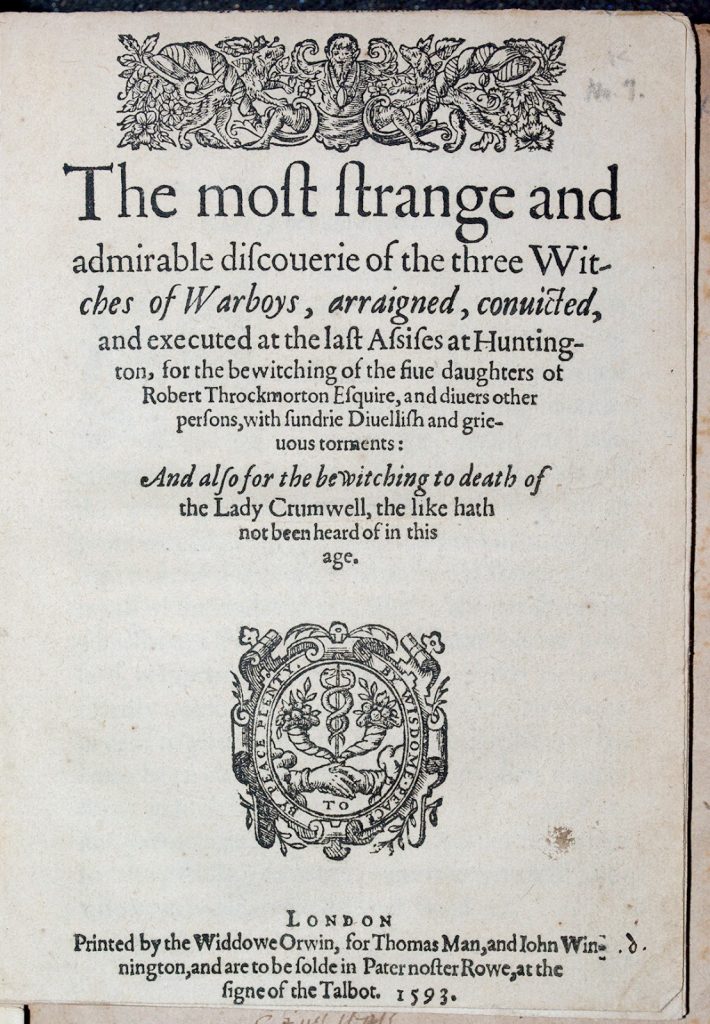 So people saw witches everywhere – and anything from a run of bad luck to a death in the family could be blamed upon maleficent workings. Huntingdonshire itself was home to what was described by George Kittredge as “the most momentous witch-trial that had ever occurred in England.” This case – known as ‘The Witches of Warboys’ – involved a plethora of accusations against local resident Alice Samuel – and her family – over a period of several years.

The initial allegations came about in 1589. Alice Samuel – then 76 years old – was accused by 10-year-old Jane Throckmorton (whose father Robert was Squire of Warboys.) Jane had become ill and was suffering from seizures; she proclaimed herself the victim of malevolent sorcery. On an occasion when Mrs Samuel had come to visit the ailing child, Jane is reported to have cried out, “Grandmother, look where the old witch sitteth – did you ever see one more like a witch than she is? Take off her black thrumbed cap, for I cannot abide to look on her.”

A number of the Throckmorton family’s maidservants became similarly ill, as well as Jane’s sisters; this led to further accusations against Alice Samuel. Robert Throckmorton’s friendship with Sir Henry Cromwell (grandfather of Oliver) led to a personal visit from Lady Cromwell, in which she interviewed Mrs Samuel about the pronouncements that had been made against her. This took place in 1590, after which Lady Cromwell maintained that Alice was deliberately appearing in her dreams to inflict emotional torture. Coupled with the now numerous allegations from the Throckmorton family, this was enough to indict the Samuel family in the eyes of the public, if not yet the law. After Lady Cromwell’s death in 1592, Alice Samuel was pressured into confessing to witchcraft and, along with her family, was tried in Huntingdon in 1593 – all were found guilty and subsequently faced death by hanging. 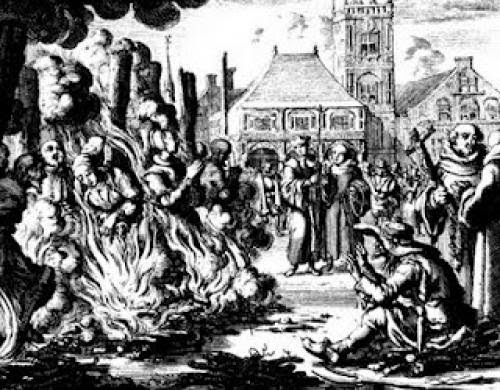 When so many are caught in the throes of fear, misunderstanding and prejudice, such travesties of justice are the order of the day. The history of Britain’s witch trials is filled with such stories; innocent people convicted on testimonies derived from ignorance or personal grievances. Hundreds sent to their deaths – all in the name of putting to rout an imaginary wickedness, concocted in the minds of the intolerant and the uninformed, and stoked by the fires of fanaticism.

Britain’s modern-day witches may no longer live in fear of the noose or the stake, but many are still subjected to a cultural alienation stemming from prejudice. There are many things that The Crucible can still teach us, and I’d suggest that one of them is that we might consider applying fair-minded appraisal and comprehension to individuals who are perceived to be following an unconventional route in life. There is an alternative to whipping up a panic and that is the opportunity for open dialogue and a willingness to learn.